Part of my recent Father’s Day experience was the chance to watch one of my favorite movies from decades ago on the big screen. I’ve had the movie’s theme song as my cellphone ringtone for quite a while and, admittedly, I have seen the film so many times that I can quote much of the dialogue verbatim. My wife particularly enjoyed periodic demonstrations of this skill and knowledge last Sunday. Sure she did.

The film is the 1963 classic, The Great Escape—the sort of true story of an epic attempt at mass escape from a heavily guarded German prison camp during World War II. I was seven years old when it came out, so I never got to see it in all its full screen glory. I was first introduced to the story when one of the networks—this was way back when there were just three—aired the movie over two nights in 1967.

That was a big event in our house. My parents let me stay up late on two consecutive school nights to watch it. It is actually one of my fondest “warm fuzzy” family memories from my childhood. Mom made popcorn, and Dad did color commentary about what World War II was like. I pointed out that his war was Korea—but he held court nonetheless.

What makes a movie endure and remain popular half a century later? Well, certainly the cast is a factor. I mean, Richard Attenborough, James Garner, David “Ducky” McCallum (how old is that guy?), and the ultimate Mr. “Cool”—Steve McQueen—they surely played a role (pun intended) in the film’s contemporary and legacy success. But there must be more. I once saw a film that had Gregory Peck and Michael Caine in it, and it was a bomb.

It’s got to be the story itself.

The late Don Hewitt, long time producer of CBS’s staple 60 Minutes, was once asked about the secret of the news magazine’s staying power. He replied that the key was as old as the Bible and as simple as four words—“tell me a story.”

It is my experience—as a writer and speaker—that good stories begin with questions—Why? Why not? How? What if?

I am often asked how I came up with the story I tell in Camelot’s Cousin. Well, it began with a question. In September 2011, I was invited to speak about my previous book, The Shooting Salvationist, to a forum at Dartmouth College in Hanover, New Hampshire. In the audience that evening was a writer who won a Pulitzer Prize for journalism in the early 1970s. His area of expertise was intelligence and the CIA.

My host that evening invited this journalist to join us for a late dinner. It turned out to be quite an evening. Having always been fascinated by the world of intrigue during the Cold War, I picked this man’s brain. We talked much about the infamous spy, Kim Philby, who had been abruptly asked to leave the U.S. in 1951, under a cloud of suspicion. During our conversation that night the subject of materials he left behind was discussed. Philby had—according to his own memoir published in 1967—buried them in Virginia. 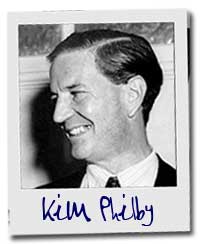 So, I asked the question—what if someone found what he buried? And what if something Mr. Philby planted beneath the Virginia soil pointed to other nefarious people and things?

That was all it took—I was hooked on a story.

[I wrote this blog for VENTURE GALLERIES, a great site about books and authors. — DRS]