[The article was written as the cover story for PREACHING MAGAZINE back Spring 2009, during the recession. It was republished yesterday by SERMON CENTRAL, and certainly has relevance for our current crisis — DRS]

During the waning days of The Great War (1914-1918), David Lloyd George remarked, “when the chariot of humanity gets stuck, nothing will lift it out of the mud better than great preaching that goes to the heart.” As a young boy in Wales, he had grown up in a family that included several preachers; so the ways of the pulpit certainly informed and influenced the only Welshman to ever serve as Prime Minister of the United Kingdom. He was a man known for his eloquent oratory and inherited from his father the idea of preaching as “thoughts that breathe and words that burn.”Much has been written over the years about how preaching can aid, inform, inspire and comfort the multitudes when times are tough. When war clouds loom on the horizon, or when hurricane Katrina-like natural disasters strike a community or nation, the person in the pulpit generally gets the chance to speak to larger, and more attentive, crowds. 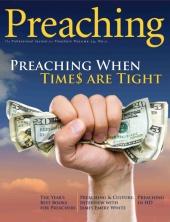 Being entrusted with sacred truth, having a burning desire to speak about matters of great spiritual value and persuading people to focus on such transcendent themes becomes a particular challenge when people are hurting financially. But before we quietly complain that people tend to overlook great moral issues when faced with economic challenges, maybe we had better step back and consider how tight times can become a critical moment for the preacher.It is simply a fact that Americans will generally see economic issues as more important that just about everything else. In 1992, when then-Governor Bill Clinton was running for the presidency, the campaign war-room in Little Rock, Ark., had a mantra on the wall: “It’s the economy, stupid.” This was designed to be a reminder that they needed to keep pocketbook issues on the front burner during their run for the White House. And it worked. It usually does. The leader who promises a rosier economic future, or who is perceived to have a better plan to fix things, always wins over someone who minimizes money matters to talk about other issues. Consider Prohibition in the 1920s. For decades, a great moral crusade led to the unprecedented step of amending the Constitution to reflect a particular position on a behavioral issue after it was trumpeted from pulpits across the land. I am not arguing here the merits or demerits of Prohibition as public policy or the issue of abstinence from alcohol (or not) as a standard. I am simply using it as an example of how a moral/values issue promoted by preachers (and a cast of others) can ultimately unravel because of a tanking economy. Prohibition was the law of the land while the ’20s roared. Prosperity didn’t have to be around the corner because it was in most living rooms. But when the crash came in 1929, and as the nation and the world descended into the abyss of depression and deprivation, it wasn’t long before the noble experiment ceased to arouse much interest. The failed economy beat Prohibition because—like it or not—in America money stuff trumps just about everything.

So what is a preacher to do? Well, in a sense, if you can’t beat them, join them. This is not an argument for watering down value-driven preaching, but rather it is simply a reminder that even preachers can’t ignore an elephant in the room—especially if the big beast is plastered with dollar signs. [READ THE REST OF THE ARTICLE AT SERMON CENTRAL. Click HERE]

3 thoughts on “When Times Are Tight”