I’VE BEEN LOOKING FORWARD to season three of THE CROWN on Netflix for quite some time, but I did wonder if the change in the casting of major characters would work.

Karen and I watched the first episode of the new season last evening and all of my “concerns” about watching someone new in the lead role as the Queen vanished.

Olivia Colman brilliantly picks up where Claire Foy left off.

The new season begins in 1964––a fascinating time in Great Britain. Political change is in the air, a move to the left as Winston Churchill withers away.

And there is a hint of espionage involving politicians and even the royal household.

Being a student of that era, and having written about it in great detail in my books, I watched for historical inaccuracies and more than annoyed my wife with my running commentary.

The series is well done.

Speaking about my books, though it is certainly self-serving, I do very much believe THE CHURCHILL FUNERAL PLOT would be a great companion to this new season for THE CROWN. 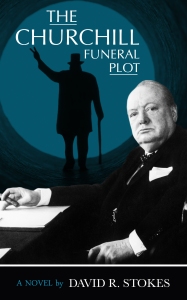 If you haven’t yet read it––it might be worth checking out. I enjoyed researching and writing it a couple of years ago.

Here are the links: