By the late 1930s, radio was a living room fixture in the majority of American homes. Furniture was arranged around the device, like big screen televisions today (which my wife still won’t let me have—sigh…). People back then were increasingly entertained, amused, and informed via the talking box. It was a great time for the imagination. Images were created in the brain, not on a screen. 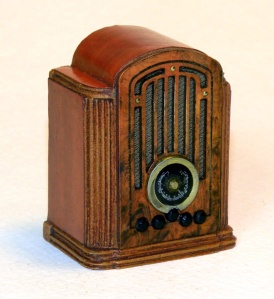 Though radio news had been part of broadcast schedules for many years, the events in Europe leading up to World War II did for that medium, what the first Gulf War did for cable television news in the early 1990s. The marriage of medium to moment brought radio to critical mass.

In September 1938, the famous broadcaster of the day, H.V. Kaltenborn, made 102 broadcasts in eighteen days as the rumors of war in Europe reached fever pitch. That was during the Munich Crisis as British and French leaders persisted in denial and pathetically continued to try appeasement with Hitler.

More radio sets were sold during those eighteen days than any other similar period in history. People sensed war was coming and they wanted to be able to know the latest. Radio news became a major part of the line-up as the time allotted for news swelled to more than ten percent of total airtime.

As the world grew more dangerous, it was also getting smaller.

Of course, people also wanted and enjoyed the entertainment. There was no doubt about that. It provided a measure of escape from the challenges of domestic life in a time of economic depression (there was actually a 2nd Great Depression in 1938) and from a larger world that seemed determined to destroy itself.

There was comedy with Jack Benny, suspense with The Green Hornet, and even more suspense with The Shadow. Big companies would purchase blocks of time for advertisement. So some shows bore corporate names—sort of like a lot of sports stadiums today. For example, The Texaco Star Theater, debuting October 5, 1938, featured comedy and variety.

But the favorite entertainer that year—especially for boys like my dad and his older brother—was the ventriloquist Edgar Bergen and his dummy, Charlie McCarthy. Never mind that even I could do ventriloquism on radio. the Stokes brothers never missed a Sunday night broadcast of The Chase and Sandborn Hour.

One Sunday that autumn, the Stokes brothers stayed a couple of nights at their Uncle Joe’s house in Detroit. The next night was Halloween and his neighborhood was a great place to fill their pillowcases with candy. So Jerry (my dad) and his brother Jim took their places on the rug near the big console radio in Uncle Joe’s living room at 8:00 p.m. and set the dial to WXYZ, which carried the NBC Blue Network.

They laughed at the opening bit, a typically hilarious Edgar Bergen-Charlie McCarthy routine. Then their laughter turned to near instant boredom as some dumb lady came on and did a drama thing. Never mind that the lady was Madeleine Carroll, a famous British actress—the highest paid that year in Hollywood, earning more than $250,000. She became a big star via her recent performance in a popular Alfred Hitchcock film called The 39 Steps.

None of that impressed Jerry and Jimmy; they wanted to hear the funny stuff.

So they turned the dial back and forth and soon found some pretty cool music on WWJ, which carried CBS shows. Mercury Theater was scheduled to be on the air at that moment. So they left the dial there and tapped their toes to a band playing a Spanish-sounding song, fully planning to check back at WXYZ a few minutes later for more Charlie McCarthy fun. Possibly this is exactly the moment channel surfing was discovered.

But the boys never made it back to the NBC Blue Network that night. In fact, all across America in thousands upon thousands of homes, little boys and girls and all grown up adults glued their ears to what was being piped into their living rooms. It began like this:

Ladies and gentlemen, we interrupt our program of dance music to bring you a special bulletin from the Intercontinental Radio News. At twenty minutes before eight, Central Time, Professor Farrell of the Mount Jennings Observatory, Chicago, Illinois, reports observing several explosions of incandescent gas, occurring at regular intervals on the planet Mars. The spectroscope indicates the gas to be hydrogen and moving towards the Earth with enormous velocity…

Then all of sudden, it was back to the Spanish music as Jerry and Jimmy stared at each other. They called out, “Hey Uncle Joe, come here, something just happened on the radio.” 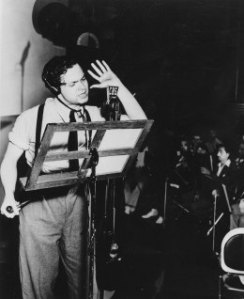 Similar scenes played out all across the country that night. The music was interrupted again and again with more details about a spaceship crashing in a place called Grovers Mill, New Jersey. Something snake-like crawled out. Fields caught fire. All reported on the radio.

Forget that Hitler guy who wanted to take over some far away place called Czechoslovakia—these were Martians—and they wanted New Jersey!

Of course, it was all a hoax first dreamed up by a young radio actor named John Houseman (he grew up to become Professor Kingsfield in The Paper Chase) and brought to life by his boss, 23-year-old Orson Welles. It had been advertised right in newspapers earlier that day in the section where it showed the radio lineup for that night. There in plain sight it said: “Play ‘War of the Worlds,’ Mercury Theater. CBS Radio.” And the broadcast began with a disclaimer—which didn’t help all the people tuning in late.

The radio spoof became a textbook case of mass hysteria. In an instant, millions of people believed we were under attack by aliens.

Of course, H. G. Wells and Orson Welles were ahead of their times with their interest in aliens. These days you can find countless books and movies about the idea of odd-looking life forms coming from somewhere “out there” to do us harm. Just do a Google search on “Area 51” and you’ll find thousands of pages of theories about the subject.

Oh, and by the way, you’ll also be placed on an interplanetary watch list—just sayin’.

Yet according to the Scriptures, aliens have been on the earth for thousands of years.

The first real life alien was a fellow named Abraham. And he passed on his alien DNA to his son, and now there are millions of people with the “not from this world” gene in them. It’s called “incorruptible seed” in one place. And when you have this gene you are born again.

The writer of the Book of Hebrews said this about Abraham and his heirs:

“All these people were still living by faith when they died. They did not receive the things promised; they only saw them and welcomed them from a distance, admitting that they were aliens and strangers on earth.” — Hebrews 11:13

The words “aliens” and “strangers” are from similar Greek words meaning “belonging to another”—in other words, from somewhere else. Having done my share of world travel, I have managed to provoke the question loosely translated: “You’re not from around here are you?” This has also been expressed to me on occasion without the use of words—just a condescending stare.

Have you ever known someone who was really “different?”

Have you ever said of someone, “That guy must be from another planet?”

Better yet, has anyone ever noted such a difference in you because of your faith, that it just seems to them to be—strange? 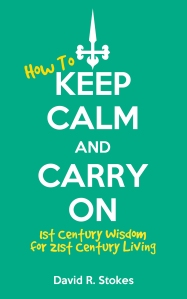 [You’ve just read a brief excerpt from “HOW TO KEEP CALM & CARRY ON: 1st Century Wisdom for 21st Century Living” — available at AMAZON as an EBOOK, and PAPERBACK]