One of my favorite movies from the past few years is “The King’s Speech”—the story of Great Britain’s King George VI, and his struggle to overcome stuttering.  Colin Firth received the best actor Oscar for his portrayal of the king.  Watching the Academy Awards that year, I was rooting for Firth. My biases are seldom reflected by the academy—for a variety of reasons—but I was thrilled when he won. 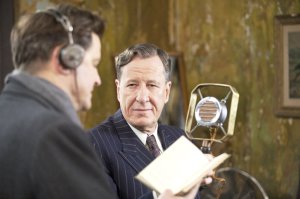 I am looking at movies a bit differently these days as I attempt to adapt one of my books into a screenplay. Stay tuned.  I have been reading screenplays—a lot of them—to get a feel for the medium.  And I just read the shooting script for “The King’s Speech,” complete with an introduction by David Seidler, the guy who actually wrote it.

As I read Seidler’s introduction, I was struck by how his own life narrative was connected with the story. You see, he stuttered as a child growing up in England the 1940s.  So it should come as no surprise that he became fascinated with the King’s story.  The screenplay was actually the culmination of a life-long obsession.

Seidler read everything he could about the King, and every once in a while he’d come across the name Lionel Logue. He would write, “who is Lionel Logue?” in the margins. And here’s the salient point—Seidler seemed to instinctively sense that Logue was the story he was looking for.

Of course, he was right.  And with the help of a friend in the U.K. who simply looked in the telephone book for anyone named Logue living in London (forty years after the story), he was led to Dr. Valentine Logue, an eminent brain surgeon. He’s the boy in the movie who always has his nose in a science book. The good doctor told Seidler that he would be happy to talk about his father and show him his notebooks—but first the writer would need to get permission from the Queen “Mum.”

So he wrote to her.

Several months later, the writer received a reply: “Please, Mr. Seidler, not during my lifetime, the memory of those events is still too painful.”

That letter arrived in 1981. Elizabeth (the Queen Mother) died in 2002. By that time, the brain surgeon was gone, too—so no notebooks. They did finally appear just before filming began, but long after the screenplay had been written.

So, how did David Seidler write about Lionel Logue’s treatment of King George VI—“Bertie” in the movie?  Well, this is where fate stepped in. He found out in an almost incidental way that his own uncle had also been treated by Logue back in the day and the techniques used were similar to what Seidler himself had experienced during his own childhood struggle.

So he wrote from memory.

It was written as a stage play at first, but someone later saw the potential for the story on the big screen, and the rest is, as they saw, history.